Fall is coming to a close. It is the last day of November, and Christmas decorations are popping up all over the neighborhood. So in a final hoorah to Fall, I bring you the story of a little pumpkin plant that made the fall season just a little more tasty and cozy and special for Mike and myself. From tiny plant to table – here is the Life of Pumpkin.

Growing up as I did in rural North Carolina, I entered adulthood with a number of skills that are not as prevalent as they once were. One of these was how to grow your own food. I possess this skill because, every year, my mother planted a gigantic garden that, during most years, produced enough butternut squash to feed the whole county. While she didn’t grow everything, Mom grew a lot of our food, and of course, my brother and I helped. So even though I may not have particularly enjoyed working in the garden when I was nine, I came to really value the skills later in life.

When I moved to Charlotte, my first attempt at my own patio garden was pretty sad. My herbs thrived, but I couldn’t grow a tomato to save my life. One day while bemoaning the fact that my eight foot tall tomato plant’s flowers were turning brown and falling off, Mom (like she always does) pointed out the obvious explanation that I was missing – there were no bees. I lived in an apartment complex. They spray to keep those sorts of creature away. I felt like a dope.

Years later, having moved into a home with a yard, Mike and I built raised beds, and I started having success with a wide range of vegetables, especially tomatoes. (Take that apartment gardening! It really wasn’t the fault of the gardener.) But I have to say that one of my very favorite items to grow has been pumpkin.

This was my first year growing these gourds, and while I normally start all my plants from seed myself, Mom started these two plants for me. Still I have known these guys from about four inches. (My apologies for a lack of photos when they were that small. I was a little preoccupied with my spinach at the time.) They are the Long Island Cheese variety, named so not because they taste like cheese but rather because they resemble a cheese wheel in shape.

Like any plant, pumpkins start out small. Though even early in life, their leaves grow large quickly. I planted my pumpkins in a raised bed in front of a row of popcorn. This was done in hopes that the pumpkins would climb up the corn stalks. But it because obvious very early on that they were growing much faster than the corn. To save the corn (it was planted at the same time the pumpkins were set out), I made a make-shift trellis out of some wire left over from our post and rail fence. It was not a moment too soon. If left to their own devices, the pumpkins would have simply pulled the corn down and crawled all over it.

While the trellis saved the popcorn, it didn’t stop the pumpkins from invading their space. The vines just grew around, through, and over the trellis.

Then, of course, they began invading the rest of the yard.

I’m fairly convinced if Korra (our dog) hadn’t done so much damage to them when she was chasing her ball, the vines probably would have climbed up the house. But as it was, she kept them in check.

Finally, they began making little pumpkins. Not all of them set (aka. survived), but this big flower got pollinated…

So the pumpkin grew… 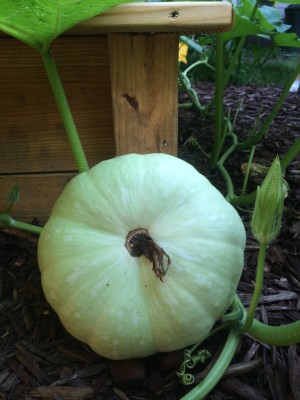 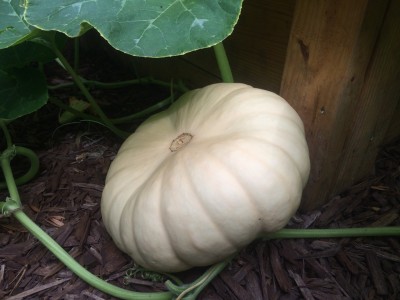 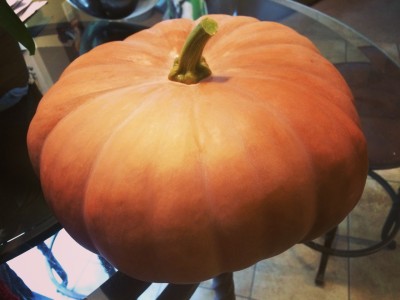 I harvested it in September, and it sat for a number of weeks on my table waiting for the temperature to get cold enough for me to want to use it. (I live in North Carolina remember.)

I harvested its brother and sister too.

This one made a beautiful mantel decoration until I roasted it to make pumpkin pie for Thanksgiving.

Then one weekend when Mike was home, we had a cold snap that plunged temperatures down into the upper 30’s (cold for NC in October), so I got to work and split the pumpkin. 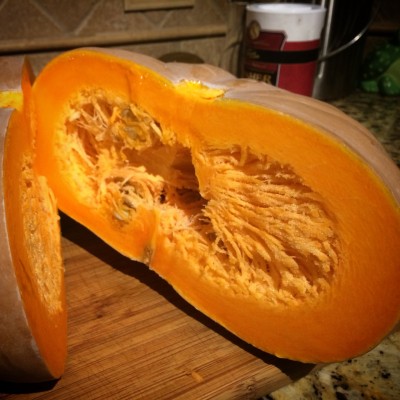 Dug out the innards, but no good gardener just throws that away. 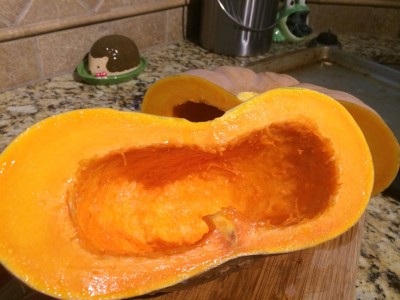 Stashed it in a strainer in the sink. 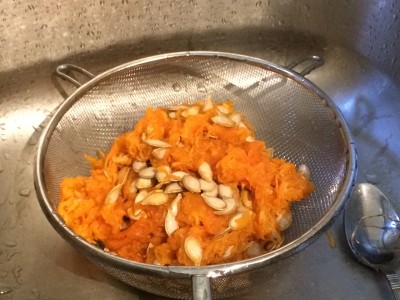 After a good rub down with sea salt on the inside, I put the pumpkin halves cut-side down on a sheet pan. They went into the oven at 425F for about forty-five minutes. 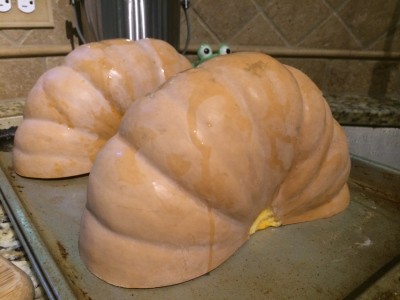 Toward the end of the forty-five minutes, pumpkin aroma permeated the house. If you have never roasted your own pumpkin, trust me, it smells nothing like the Yankee Candles. It just smells like Earth and Autumn and Happiness. Good smell. 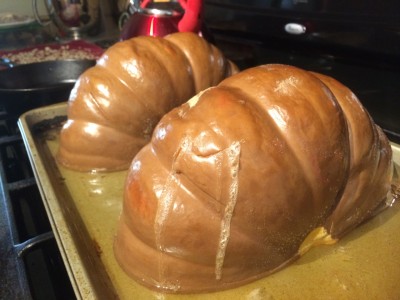 Once it was easy to insert a knife through the pumpkin, I pulled them. Now, out of the oven, pumpkin is blazing hot, so it was definitely best to let the halves sit for a bit and work with the seeds. 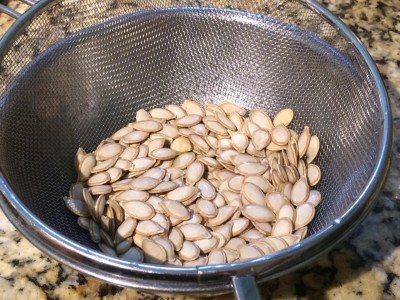 After removing all the stuck pumpkin innards, I washed them and spread them out to dry. I saved seeds from the first pumpkin for next years planting. It was after all the biggest pumpkin off of the healthiest plant. The seeds from subsequent pumpkins, I roasted. 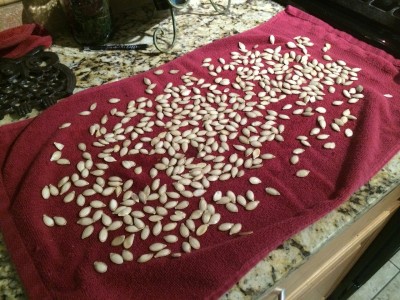 Toss with olive oil and salt, spread them out on a sheet pan, and into a 350 degree oven, they go for about half and hour.I shook the pan every 10 or so minutes, so they would brown more evenly. Crunchy yums. 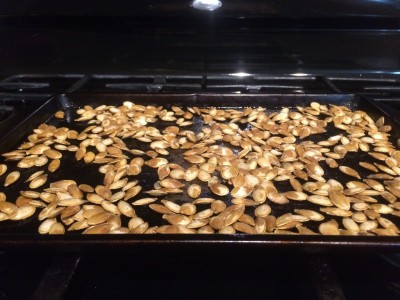 Now that the pumpkin seeds are taken care of and the roasted pumpkin was cooled, it was time to make pumpkin puree. I just scooped the pumpkin flesh out of the skin and processed it with the stick blender until it was smooth.

The pumpkin is now ready for use in a variety of pumpkin yums. 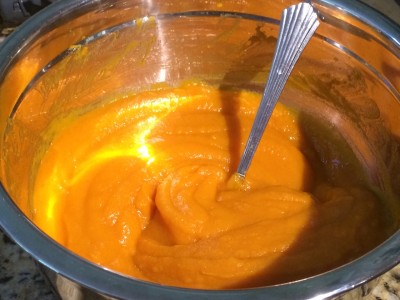 And the skin goes into the compost. Waste not; want not. The seeds for next year will be hungry.

This variety of pumpkin is amazingly sweet and yields itself well to confections.

Try this pumpkin pie recipe. It’s from Alton Brown, who does all food well. I do add some cinnamon and cloves to my pie because my family likes it better when I do. (¼ teaspoon of each.) Other than that I follow the recipe exactly. The gingersnap crust is always a big hit.

These muffins were made using this recipe. Try it. Mike loves them.

While the sweetness of the Long Island Cheese pumpkin is perfect for pies, muffins, and other sweet treats, it also makes the super yummy Pumpkin Soup that is a savory fall favorite in our house. If you are limiting yourself to sweet pumpkin foods, do yourself a favor and try it savory. It does not disappoint.

And so ends my fall adventure with pumpkins. I pulled the vines up and burned them this past week to minimize the risk of diseases and pests infecting my garden for next season. You had a great life, Pumpkins, and I look forward to tending your children next spring.

2 Responses to "Life of Pumpkin"