I have a new niece named Audrey. You’ll just have to take my word that she’s super cute. Yes, I have pictures of her, but as she is not mine and I have not asked permission to post said pictures, they will remain tucked away on my electronic devices, giving you a chance to use your imagination. Know that there are times when, somehow, she looks just like I did as an infant – which is pretty darned cool considering I didn’t make her.

Audrey is two months old now, so her pastimes currently include eating, pooping, smiling, crying, and being cute. My sis-in-law Tasha decorated her nursery with mermaid paraphernalia, so Audrey is now our little mermaid. Given our family background with grandpa’s shrimp boat and surfing at Holden Beach during the summers of our youth, I approved of and was pleased with this choice. It also meant I got to do something fun.

Before Audrey was born or even named, I determined that a mermaid needed a pantheon of sea creatures to keep her company.

I got to work.

When I was very young, my Gandma Love (God rest her soul) taught me to crochet, and through the years I have produced many scarves, hats, baby blankies, and even one queen-sized afghan. Though I do enjoy many manly arts like Muay Thai and shaping metal, I also enjoy some old lady arts – if for no other reason than it connects me to my grandmothers.

A couple years ago, I grew a little tired of making scarves and hats. Let’s be honest. My friends and family don’t need drawers full of my handmade winter gear, especially since most of us live in North Carolina, which isn’t cold for most of the year anyway. So I began making amigurumi animals.

If you are unfamiliar, amigurumi are crocheted or knitted, stuffed dolls. The art originated in Japan, and the translation of the word is roughly “crocheted doll”. Typically, amigurumi are animals, but they can be people or personified objects, and though it’s not really a requirement to be amigurumi, the product is typically cute in some way or another. My initial challenge with amigurumi was that I often have a hard time following crochet patterns. I easily forget which row I’m on because the action of crochet transferred to my muscle memory years ago. Having mastered a few basics that are crucial to producing amigurimi – like the magic circle and working in continuous rounds, I decided to ditch the patterns and began studying images of well-crafted amigurimi and the real animals they embodied. By doing this, I could focus more of how the amigurumi was shaping up and make adjustments as needed rather than hyper-focusing on what came next. Also, it was fun to figure out how some of these artists accomplish certain looks. (The extremely skilled artists still have me baffled.)

Finally, I was ready to begin making amigurumi sea animals for Audrey. Though I started this project before she was born, Mike and I gave most of them to her for Christmas, and despite her being significantly more interested in the sound of wrapping paper when we opened presents, supplying our little mermaid with aquatic friends made me very happy. 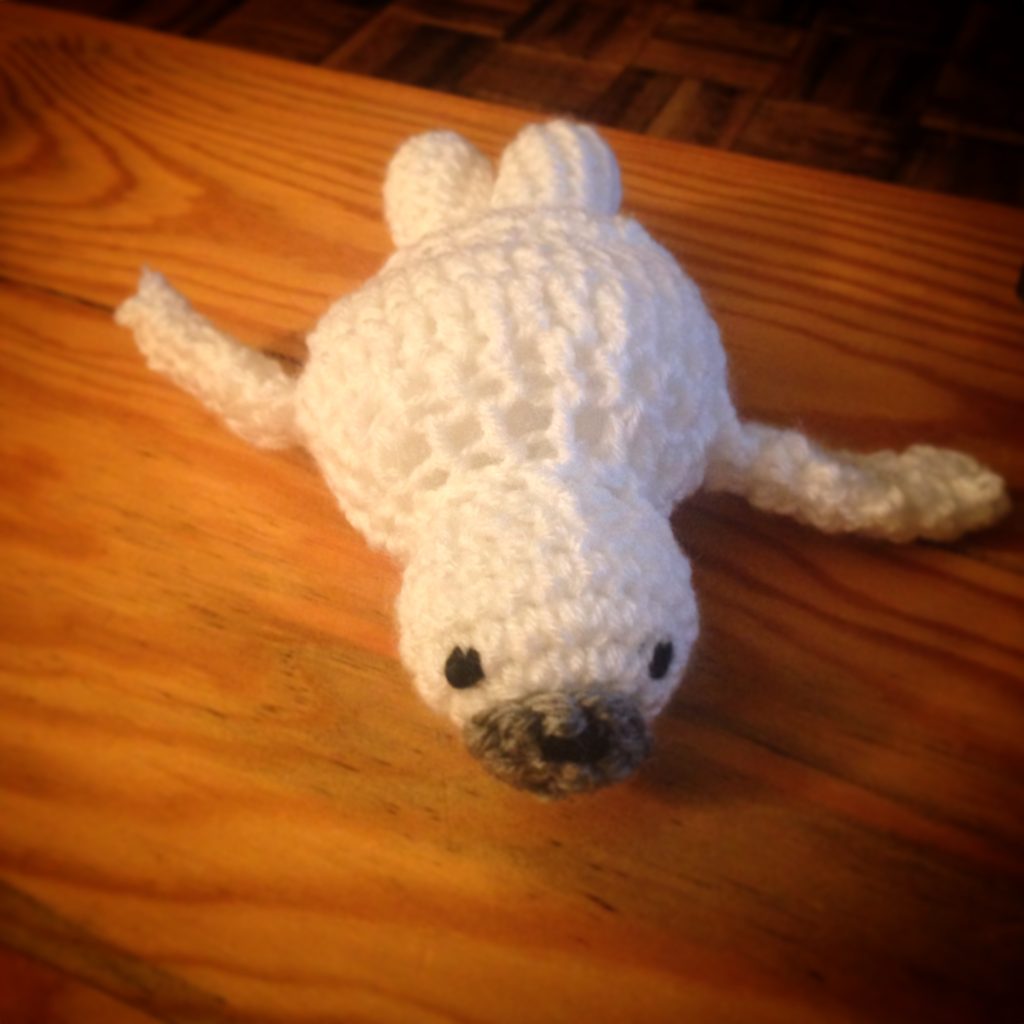 Audrey actually got the Harp Seal before Christmas. She was the first of my sea creatures, and I gave her at the baby shower. While there are certain things I would do differently now (like not using the double crochet in her body), she is one of my favorites. She is six pieces – nose, head, body, two fins, and tail. 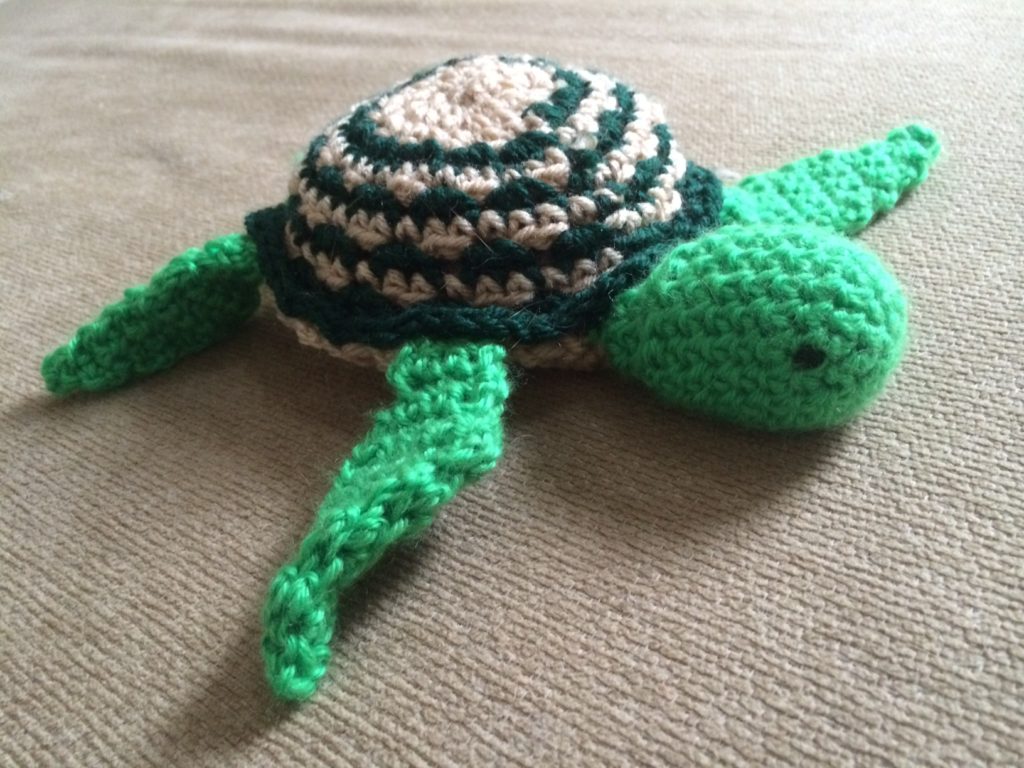 The sea turtle was second. On first try, I made his head far too big. If at first you don’t succeed… He looks better now. He has more pieces than any of my other creature – two pieces for his shell/body, four fins, a head, and a tail. 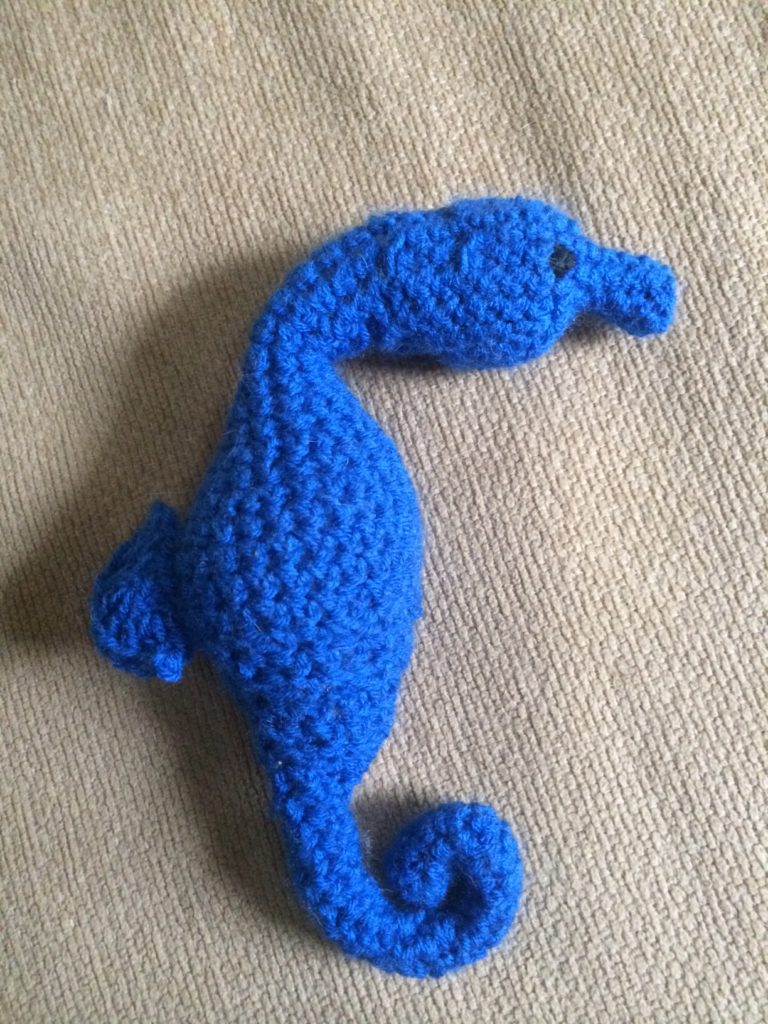 This guy was one of my favorites to actually make. He is only two pieces – his body and his fin.  His body from tail to snoot is worked in continuous rounds, and he has a pipe cleaner backbone to make his tail and head bendy. 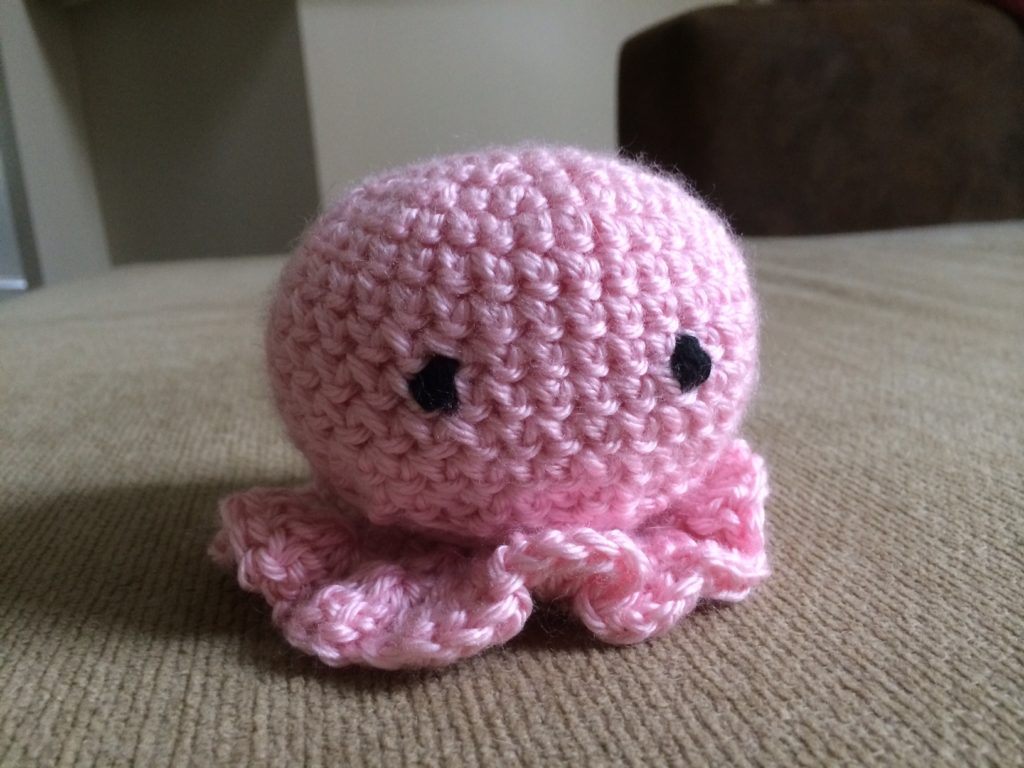 When I told my mom I was making a jellyfish, she pointed out that I could not give anything to Audrey with tentacles. Good point, Mom! So this little girl is a baby jelly. I created her “tentacles” with a shell stitch variant. 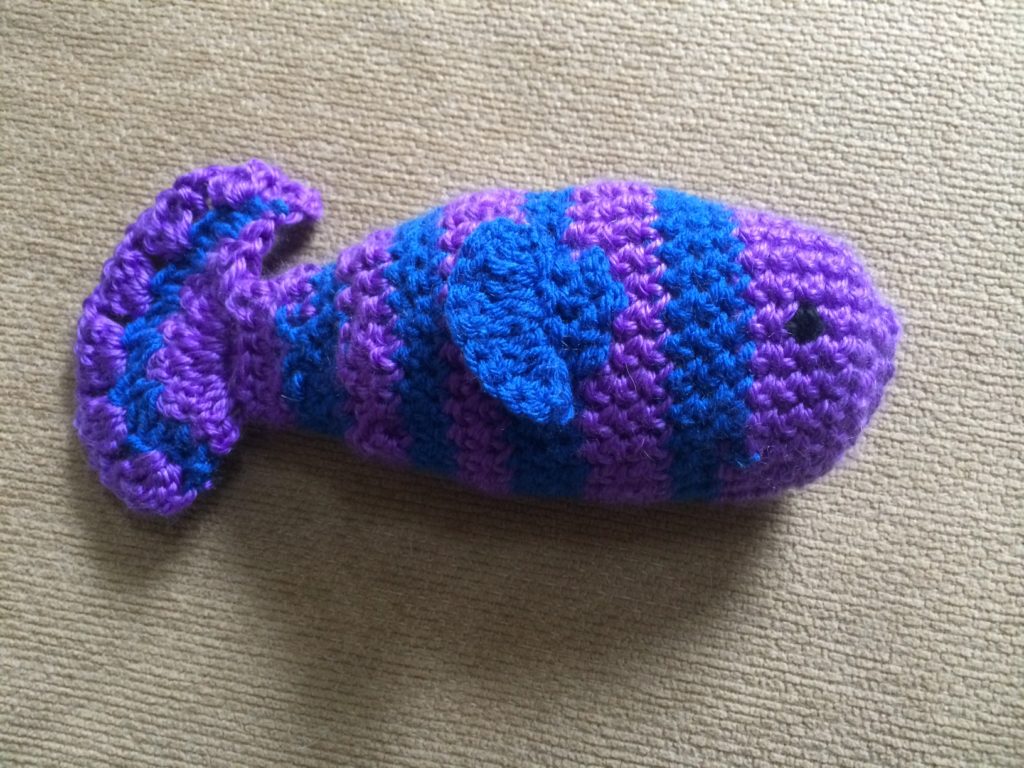 Of course, a mermaid has to have a fish. This lady is purple because I love purple. She is made with four pieces – her two fins, tail, and body.

Okay, I’ll confess. This guy is my favorite. His top and bottom are two separate pieces that are sown together. I made the top piece wider to allow me to stuff his body. I worked his tail in rounds after I had joined the body pieces. 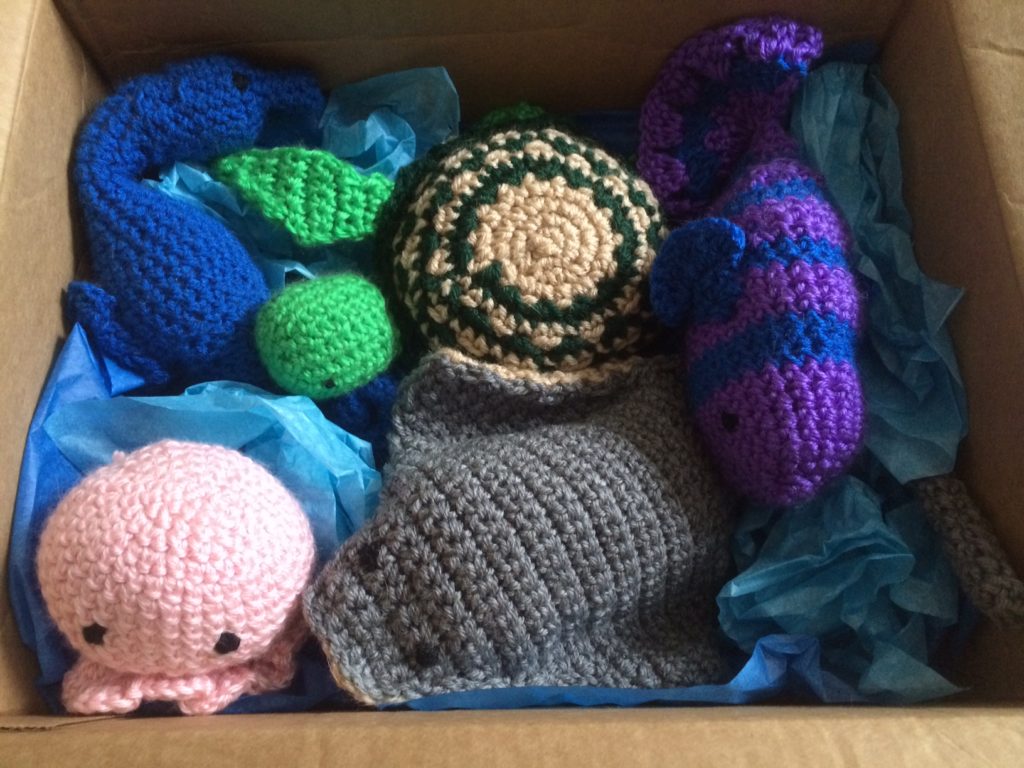 And here they all are! (Minus the harp seal of course) Ready for their new best friend. Wanting the illusion that they were swimming in the ocean, I placed them in a box surrounded by different blues and white tissue papers. 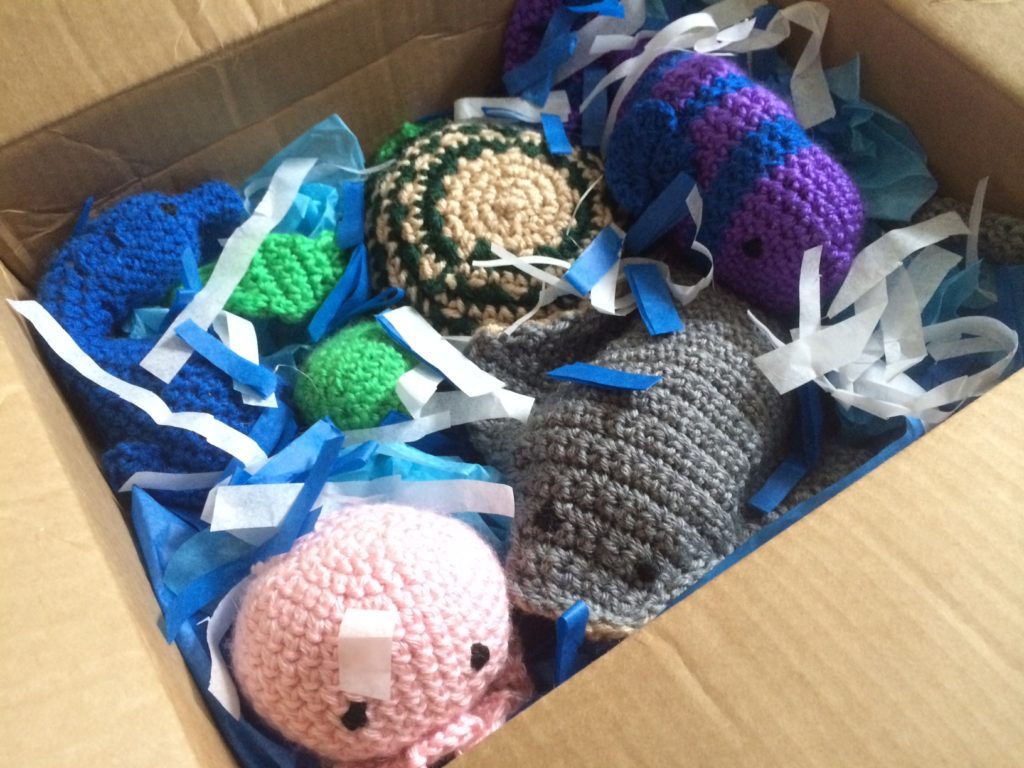 Am I done? Probably not. Will the new ones have better craftsmanship than their predecessors? Likely, but at least now Audrey has a few cute, aquatic buddies to keep her company in the meantime.