Charlotte has, over the years, developed a thriving film community. At this point, you can always find a project, large or small, in the works. So do you happen to know what the longest, consecutively running film festival in Charlotte is?

Well believe it or not, that festival is Manifesto. This year marks its eleventh festival event.

Manifesto is produced by the film and interactive media students at a local arts college. One of the characteristics that makes this festival unique and appealing is the time limit imposed on entries. No film shown is more than ten minutes long. This means that you do not have to commit seriously to anything. The great offerings make you sad they’re over; the not so great ones don’t last very long. Regardless of format (view them all or pick your poison), everyone who has attended a film festival has been in that interminable situation where you don’t like the film, it’s not particularly well done, and it just won’t end. Not really a problem at Manifesto. 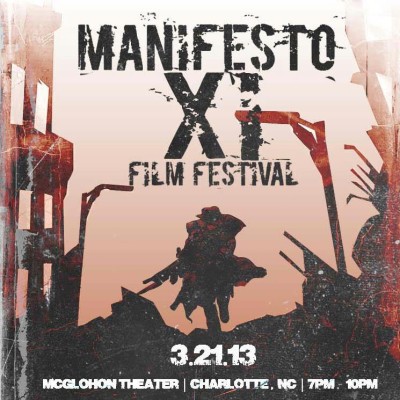 My experience attending past Manifestos has been enjoyable. No, you’re not going to like everything you see. That’s to be expected. But in a way, the short format makes the great films all that much greater. It’s hard to tell a compelling story in such a short span of time, and when it’s well executed, the impact on the audience really is an experience you don’t want to miss. In addition to awards given by a panel of judges, there is an Audience Pick award that allows festival attendees the opportunity to really be involved. It’s fun, like you’re helping write the manifesto.

So what are you doing tomorrow night?

Manifesto Film Festival XI is Thursday March 21, 2013 at McGlohon Theater at Spirit Square. Doors open at 6:30pm; festival beings at 7pm. Admission is $8 for general public and $6 for students (I’d bring my Student ID if I had one).

For less than the price of a movie ticket you can see roughly 20 short films that may alternately excite you, entertain you, frighten you, dazzle you, or make you laugh. Come on out. I’ll be there, we can talk film and whatever else, and if you let me know you’re coming, I’ll save you a seat.